Like I promised, I have finally gotten around to posting my editing process. I have decided to start off small and then move to the more complicated ideas further on. For this process, I have just posted a before and after because it's a simple edit. 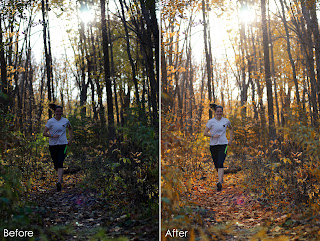 So the shot above was actually a test shot (I hadn't gotten my setting right yet) but I liked it so much, I decided to use it. The problems with this picture are:

Despite the edit being simple, the process was much more complicated.

- Increased the exposure by 2 stops (if I recall correctly), increased the vibrancy and added some fill light using CameraRAW
- Used the selective colour tool to make everything an autumn orange
- Used curves to add more red into the foilage on the ground
- Used the liquify tool to bring in the sides of her shirt
- Added a circle gradient around the light source to make it softer
As you can see from the before and after, I didn't do too much to it besides increase the exposure and change the colour but it made a world of a difference.

at 18:02 No comments:
Email ThisBlogThis!Share to TwitterShare to FacebookShare to Pinterest
Newer Posts Older Posts Home
Subscribe to: Posts (Atom)